Going with the Flow vs. Being in the Flow

You’ve heard the expression, go with the flow. It’s been used in countless situations by motivational speakers, counsellors, life coaches, teachers, even just friends and family.

There’s a kind of hurried passivity to going with the flow which reminds us of the rat race and rush hour.  Everyone is in a hurry to get somewhere, but limited to the flow of the traffic. Everyone is in their own little world, wanting to be anywhere but where they are, push/pulled forward by the inevitability of the “big machine”—or, for a more organic metaphor, the enormous lumbering amoeba.

Cog in the wheel, ant in the hive, there is something about going with the flow which says follow the crowd, to us…be at one with the mob.  To go with the flow is a kind of surrender of oneself, but a surrender to circumstances and the status quo.

Going with the flow strikes us a kind of unconscious activity. A “shrug your shoulders and give up” type of response to the “inevitability of life.” Get up, go to work, come home, watch TV, go to sleep. That is a flow, alright…and it’s a flow many certainly go with. But it’s not exactly one anyone wants to be in. So, we tune out. And therein lies the crux of the problem with going with the flow.

Going with the flow leads to a kind of psychological and spiritual stagnation. A dead leaf blown haphazard on the wind…no longer connected to any real purpose. Just going, going, gone.

When you go with the flow, you are never really being in the flow.

One can be very much in the flow and yet not just going with it. To be, present, here and now, conscious, awake, alive…whether one is standing still and observing an ocean of people pass by during rush hour, or walking together very much in sync with them.

Being in the flow of life is the difference between the dead leaf which floats downstream, and the otter which is one with the river, no matter sunning himself on a rock or playfully shooting the rapids. The leaf goes with the flow. The otter is being one with the flow.

And it’s amazing what an experience one can have when one joins in being one with the flow of the moment especially if there’s actually an otter involved!)…

Being in the company of an ecosystem, being one with its flow, can profoundly affect your ability to be in the flow of your life. Now, we’re not saying you’re going to have experiences like playing with an otter, but you’d be surprised just how profound an effect an ecosystem can have on you.

The Changing Face of Real Estate in Toronto 2015

“The stakes are high surrounding the fortunes of the Greater Toronto Area housing market,” adds the report. “A healthy housing system is critical to a region’s economic fortunes. And with the GTA key to Canada’s economic engine, the success or failure of housing in this region carries significant national importance.”
~ TD Economics Report
Source: thestar.com Real Estate

$140,000 is a big number. And according to a TD Economics Report released Monday, it is the annual income needed to finance a single-family home in the GTA (which now costs about $740,000). Source: thestar.com Real Estate

The problem, as it turns out, is all that urban densification happening around the city (translation: the condo-crazy city).

New home sales are way down compared to new condo sales. This has led to a shortage in supply of homes and that has helped push prices up to the point where Toronto is nearing New York-like home costs. And it should not come at all as a surprise, according to George Carras, President of RealNet:

“This is a problem ten years in the making. … The desire to curb sprawl and encourage intensification has led to the continued condominium boom in the 416, spiking home prices and a widening price gap between low-rise and high-rise housing product.”
~ George Carras, President, RealNet, Altus Group
Source: National Post 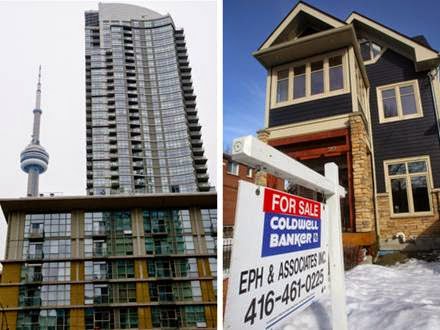 If something is not done, it is clear that more families will have to live in hi-rise condominiums. And, as it turns out, builders are responding by starting to offer larger condos (as opposed to the 400 sq. ft. variety designed for first-time buyers and young singles).

What to do? Clearly, new homes require land. No one wants to take the GTA back into the urban sprawl scenario which warranted the current urban intensification approach. And yet, it is all but impossible for entire neighbourhoods to be levelled to build new low-cost low-rise housing.

What can be done?

With our partner, Casavant, PeapodLife is able to offer benefits to each of the following:

•    Home buyers: a way to purchase, renovate and own a home they could otherwise not afford, complete with an indoor rainforest ecosystem. 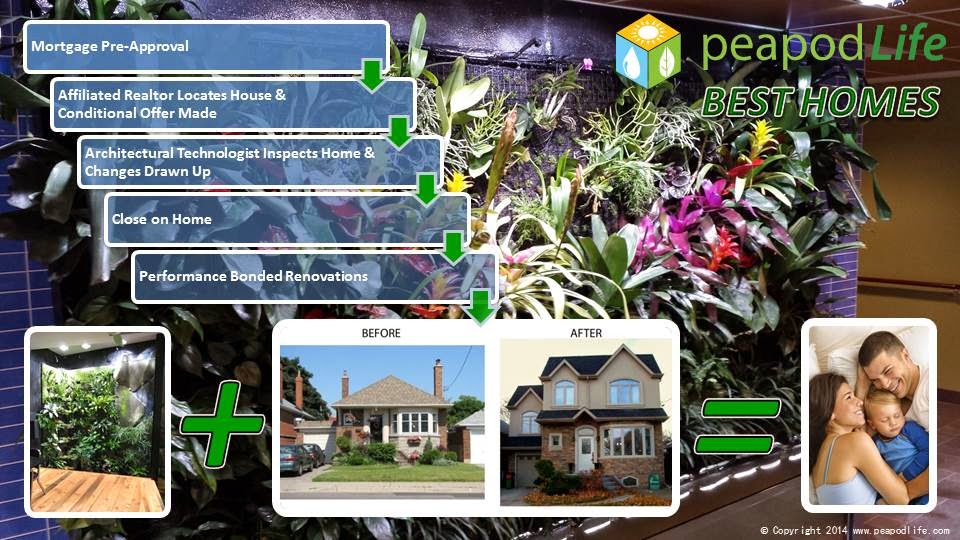 •    The City of Toronto: a practical way to achieve urban densification and urban renewal while reducing the load on aging infrastructure and services (PeapodLIfe BEST HOMES are more efficient, and utilize cisterns to capture and utilize precious rainwater for ecosystems instead of it running off into Toronto’s overwhelmed drainage and sewer system).

•    Real Estate Investors: an easy way to increase their return on investment. 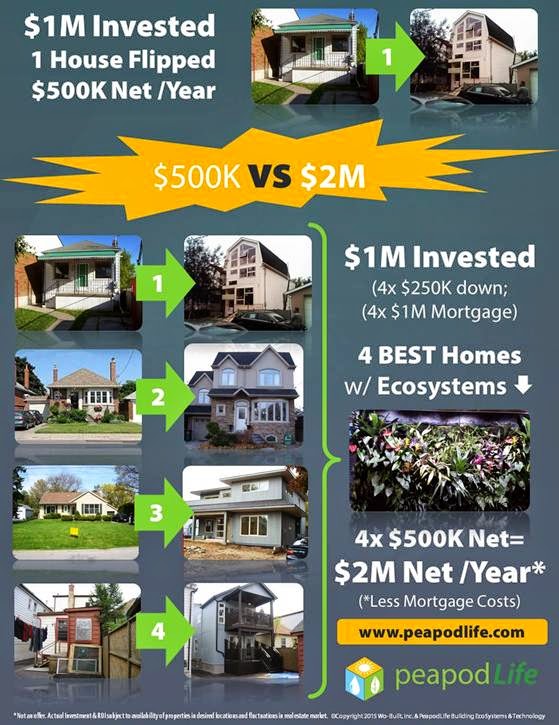 So, from our standpoint, in 2015 the BEST thing that can happen to the Toronto Real Estate market is PeapodLife. Why not contact us for more information and put your BEST foot forward in 2015.

Posted by PeapodLife at 13:04 No comments: 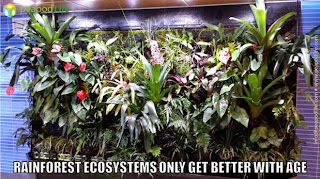 PeapodLife: Rainforest Ecosystems only Get Better with Age

“A child seldom needs a good talking to as a good listening to.”
~ Robert Brault,
Source:  rbrault.blogspot.com

It’s hard to believe it’s already been 6 months since we installed and last paid a visit to the rainforest ecosystem at 235 Fitch Street, Welland Ontario. But yesterday we paid a visit to do a routine maintenance on the system and took the opportunity to “listen to our baby.”

And while it can’t do justice to being there in person, we just have to share some “baby photos” and a very short video up-close with the living wall ecosystem. See if you can spot the “hidden” orchid!


In case you missed the secret orchid, here’s a closer look… 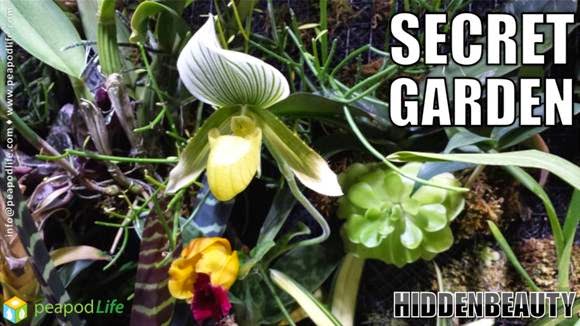 But of course, discovering new, beautiful and wonderful aspects of your living wall ecosystem is not always a game of “hide and seek.” Sometimes it’s a case of “slow-motion fireworks” as only Mother Nature can do…and boy can she put on a show. 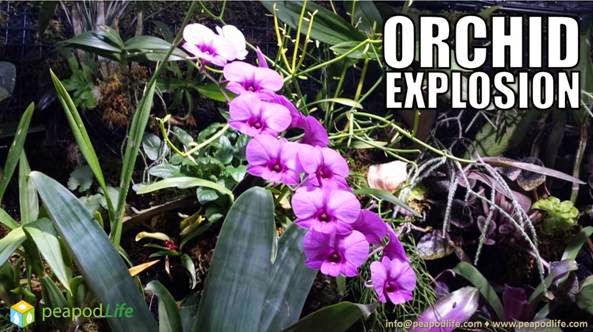 Suffice it to say, residents of the Fitch Street affordable retirement residence are thrilled with their ecosystem. They have a ball watching the orchids come and go, keeping an eye on the fish, snails, and the overall progress of the system.

Many have taken a real interest in their ecosystem, and why not? Wouldn’t you? Just imagine yourself being greeted by your own rainforest every time you arrived home (especially in the dead of winter)! 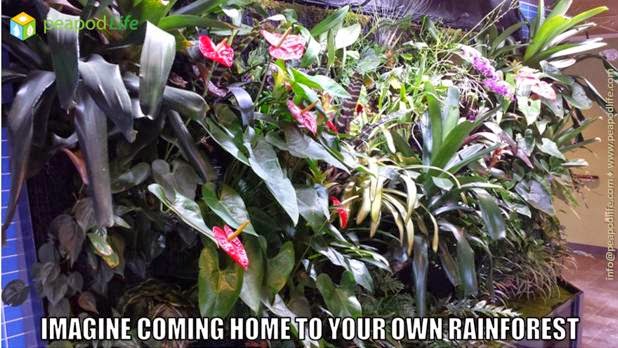 PeapodLife: Imagine Coming Home to Your Own Rainforest

Coming, going or just passing by, no matter how many times or how many different ways you look at your PeapodLife Rainforest EcoSystem, you soon discover that it only has one “side”…it’s “best side”… gorgeous. 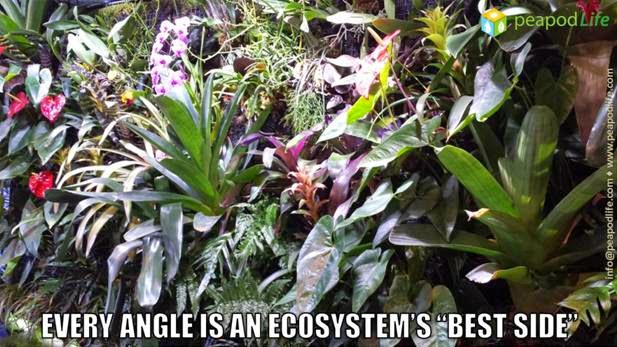 PeapodLife:Every Angle Is an Ecosystem's 'Best Side'

Stay tuned for more updates in the future.

Better yet, connect with PeapodLife now and start watching your own rainforest ecosystem “baby” grow!

Posted by PeapodLife at 13:06 No comments:

A New Year; A Better Approach to FLIPPING HOUSES 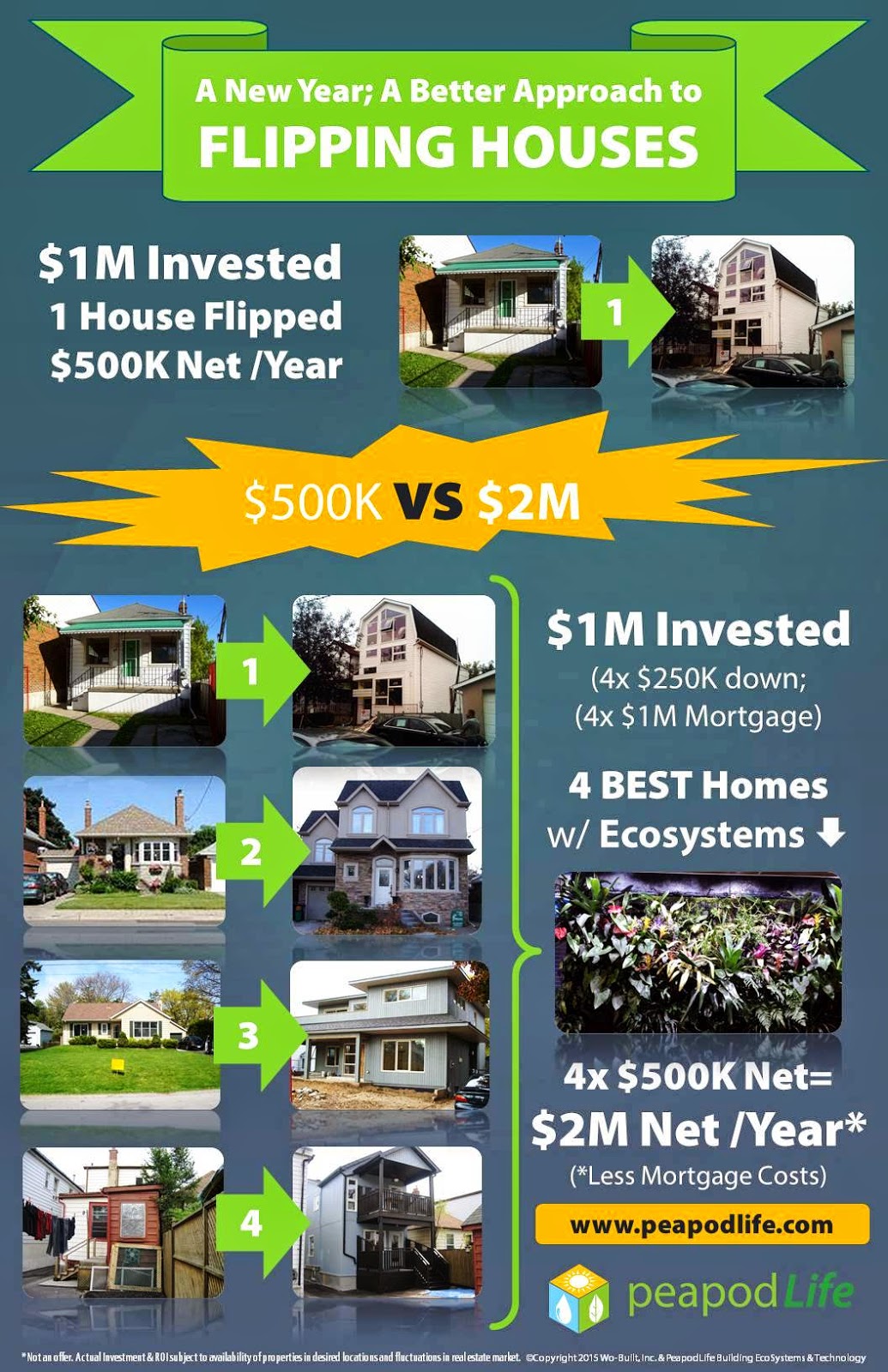 Infographic: A New Year; A Better Approach to FLIPPING HOUSES

Everyone at The PeapodLife wishes you and yours a Very Happy New Year. And if you are in the business of flipping houses (or have been thinking about investing in Real Estate, then contact us and start your New Year off with more Bang for your Investment Buck!

PeapodLife
PeapodLife revitalizes buildings by integrating nature and technology to put human beings and ecosystems together again in mutual symbiosis. Forget “green” buildings, we create Living Buildings. Living buildings are defined not only sustainable—energy and water use; producing clean air and organic food—but also holistic—serenity, productivity, health and wellness, satisfaction and vitality—for individuals, families, employees, organizations and communities. PeapodLife puts the foundation of life back into residential, commercial and institutional architecture. PeapodLife Building EcoSystems & Technology is the product of cooperation amongst strategic partners who share common values including the 3P's: People, Planet, Profits. Like every organism in any ecosystem, each Partner makes a significant contribution to the collective symbiosis of the whole. The ecosystem becomes a super-organism by virtue of the integration of each individual participant. The community of organisms naturally attracts additional participants and the ecosystem grows and thrives.